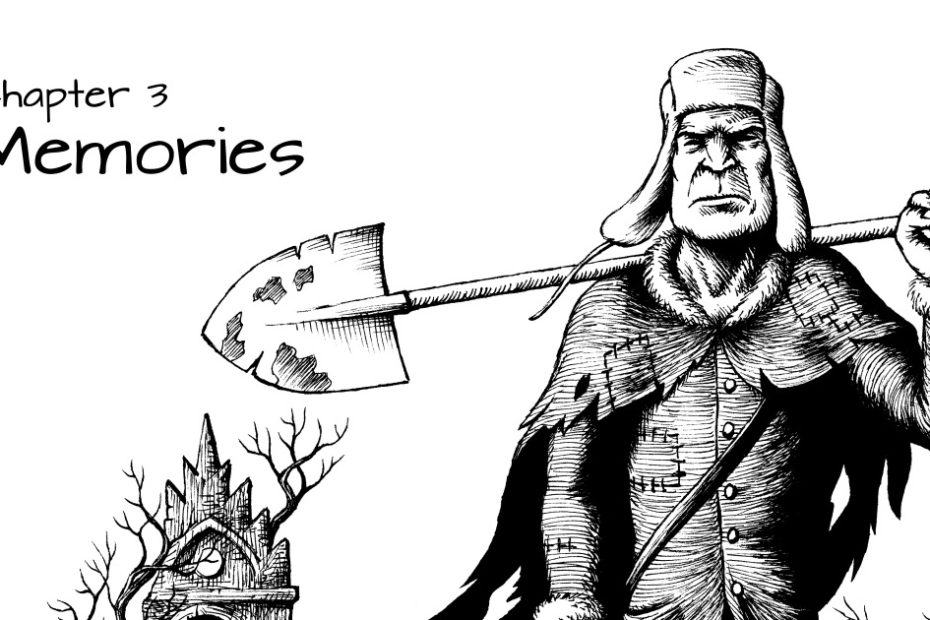 This is the third chapter of the series about The Undertaker From Mokvas. If you haven’t done it yet, read the previous chapters first:

The following evening the woman arrived again after sunset. The Undertaker left her to throw stones for a good half hour until he finally decided to crawl out of his hut.

“Do I have to do this for another twenty times?” she complained. “Begging here out in the cold for your attention?”

“Then dress warmer,” he replied.

He took her inside and pinpointed the bed with his index finger. She stripped herself with a drop of sourness but as he screwed her, she seemed to enjoy it. Actually, he ignored her. The grave digger was taking his reward and in that way he behaved. He didn’t care about details such as how this woman got excited when he was acting completely selfishly.

“Do you have any preference?” he asked her, once they were standing above the open mass grave.

“Did you… throw him back?” the woman asked with mild surprise when she spotted the naked body of her late husband with an open skull.

“Should I have thrown him over the city wall?” His voice bore annoyance. “Or served him for dinner?”

After she remained quiet, he repeated his question:

“Any preference or should I pick someone by chance?”

He grasped the first corpse and pulled it from the earth.

It happened two weeks ago. The Undertaker remembered it in colorful detail as he did with every funeral. A carriage towed by two horses and accompanied by ten militiamen, known as skincoats, had stopped in front of the open gate. Instead of entering the cemetery they had waited. For an hour or two they remained on the other side of the fence, standing motionless, staring into the graveyard. The Undertaker had seen and lived through many things but this gave him the creeps. He retreated into his house and decided to stretch out on the bed and ponder as to why people are afraid of the dead when they should be afraid of the living. Until someone knocked on his door and stepped inside.

One of the high ranking militia officers appeared. Without a greeting he put a coin purse on the desk and parted after the following words:

“A mass grave for about twenty will do.”

The Undertaker unwillingly abandoned his bed, grabbed his shovel and headed to a distant edge of the yard, in the shadow of the massive city walls which surrounded most of his domain. Unseen by the ghoulishly frozen militiamen he started to dig.

The carriage finally appeared. The Undertaker rested, leaning on his shovel, watching the pale men in leather coats, caps and curious goggled glasses move hypnotically about like animated toy soldiers. He heard the countless stories of golems of clay and stone, controlled by some ancient magic, fighting in chairman Ociph´s armies in ravaging wars against the Northern Realm. But these were living creatures, still of flesh and blood.

The agents opened the carriage and mechanically, without any sign of emotion, dumped the corpses of former comrades into the fresh pit.

“Are they even human?” a broken mother had once asked when she had brought coffins with her two young sons. Both of them belonged to alleged sympathizers of an illegal movement opposing Ociph´s usurpation of the city. The skincoats stormed their apartment and shot the boys in cold blood while they were sat at the dinner table. In front of their mother.

The terror unleashed by the militia officials and conducted by their leather coated minions quickly spread throughout the entire city and the former east province, torn out of the Northern Realm. It reached nearly every household, nearly every corner. First it was invisible, discreet, silent. People vanished from the streets or were found murdered in their beds. Later, the fear needed to be tangible and omnipresent, so public mass executions began. The crowds were regularly dragged into the embracement of the large stadium of Metallurg Mokvas and forced to witness ceremonial hangings, beheadings or impalings of random accused persons. The football field turned into a death orgy. “Rejoice, citizens of Mokvas!” the voice of the new rulers constantly preached from amplifiers. “We brought you freedom from oppression of the Northern Realm! We brought you equality, prosperity and progress. Rejoice!”

As has been said, the apostles of the new order and their leather-coated minions with ultra-modern revolving guns swiftly swept through the land. Few domains remained untouched. One of them was the ancient graveyard of Mokvas, obscured by the municipal walls, which had begun to swell dramatically since the new rulers had taken over the city.

The Undertaker felt challenged by the emotional numbness of the skincoats. Once they had dumped the bodies into the pit, he opened his pants and relieved himself. Upon the pile of jumbled corpses. But there was no reaction. The attending militiamen simply stood nearby watching him from behind their opaque goggles. They remained in that pose until he covered the bodies with earth.

He asked himself why they never harassed him. Well, actually, they did. It was more like a street incident. A group of these thugs attempted to burn down his favorite bakery. On most occasions he avoided conflicts – or rather the conflicts avoided him. But on this occasion he decided to cross their path.

With one hand he grasped his shovel, with another he pulled out his long belt with heavy iron buckle. Six of the skincoats got a bloody bashing before any one of them could touch their gun. After several seconds they ran in disoriented panic.

In fact, the skincoats had at least one significant reason to hunt him down. And this reason was their boss and creator himself – Ludo The Shovelface. Shovelface. It meant more a defamation than a nickname and for mentioning it in public there was an immediate death penalty. Ludo had to thank the Undertaker for this flattering epithet.

This erratic bald guy with small stature and vulpine eyes close to each other had tried a long time before to make his living as a football commentator. During the matches of Metallurg Mokvas he shouted through an amplifier from the ranks at the field, taunting players, referees, visitors. Once he got dangerously close to the Undertaker , dangerously oblivious to his presence and carelessly yelling into his ear. The gravedigger turned around and with one swift move banged the annoying football ultra with his shovel against his face. Ludo fell into a coma from which he awoke after a few weeks disfigured. Mentally and physically.

The ambush of the iron tool forever changed the shape of his visage to a shovel form. “Welcome back,” the attending doctor greeted him. “You’ve got a pretty shovel face, but you have survived.” Shovelface… After hearing this Ludo climbed out of bed and strangled the physician with his own linen bandages. From then on killing people became his new mission. And the revolution of Trevor Ociph offered such perfect opportunities he could never previously had imagined.

Ludo sought revenge in blood. On everyone but the guy who disfigured him. For the Undertaker he prepared something special. He convinced his new leader Trevor Ociph to ban football from Mokvas for good. Thus he robbed the grave digger of one of his last pleasures and inflicted upon him a more severe blow than any beating or torture.

“Hey…,” the voice of the widow echoed somewhere from beyond. “Are you all right? You seem… distracted.”

“I’m not distracted,” the Undertaker grunted. He returned from his memories and realized that he had been staring at the naked skull of the selected skincoat and holding the handsaw for an uncertain amount of time.

“Can you please remove his goggles?” the woman asked. “I always wondered how they look like beneath.”

The gravedigger tore the gear off the man’s face. It was accompanied by a disgusting smacking sound.

“Fascinating,” the woman mumbled as the eyes of the militiaman were revealed, completely swollen out of their sockets, having merged with the goggles.

The Undertaker reached back for the handsaw while the woman investigated the gear and turned it around in her slim feminine fingers.

“Here’s your trinket.” He handed over the amulet with parts of the brain still dripping from it. “And there’s the bed.”

She snatched the valuable and dried her hands in the already dirtied clothes of the dead skincoat. Then she undressed.

“Are you not curious why I’m doing this?” she asked the grave digger after the coitus as she sat naked on his bed , adjusting her thick long hair. “Or even what my name may be?”

She sighed barely noticeably and attired herself.

“Tomorrow then,” she whispered. In vain, because the Undertaker was already snoring.