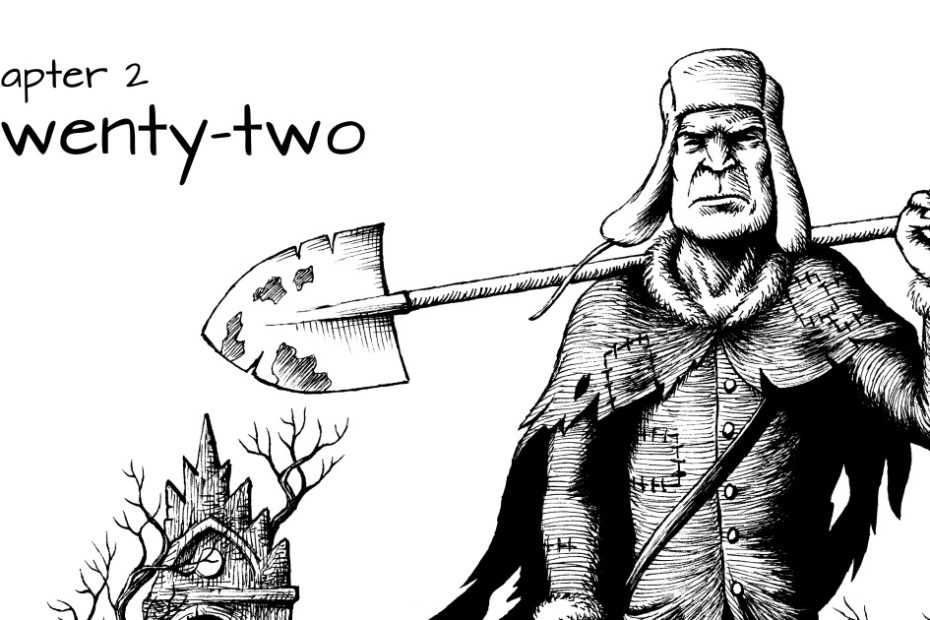 This is the second chapter of the series about The Undertaker From Mokvas. If you haven’t done it yet, read the first chapter before this one. This is the list of all published chapters:

“This one?” he asked, slightly surprised.

“I did,” he retorted reluctantly.

They both stared at a relatively fresh mass grave without any headstone or marker. Just a pile of earth.

He remembered this funeral in detail like he remembered them all. Twenty two bodies. The complete elite squad of hitmen belonging to a private paramilitary militia. All thrown in the hole in a pile just as they were. In their dark brown leather coats, pullovers, goggles – all soaked in half-dried blood. Only their weapons, cartridges and IDs were removed. And their jack-boots of course.

Silently the Undertaker shoveled back the frozen solid earth until the sharp edge of his tool hit a leather sleeve. One after another he pulled out a body and the woman in black shook her head at the sight of each. Until he found the ringleader. The lady remained silent and gazed at the corpse.

So, the wench of a decorated thug, he thought to himself. Now he felt even more satisfied that he had screwed the widow of this scumbag. Similar to the satisfaction when he had buried them. Somehow he envied this mysterious force which killed these agents. Twenty-two men less to spread fear and terror in the city of Mokvas. His city.

Back inside, he dumped the body onto the massive oak desk. Although the thug was a strong strapper, he nevertheless felt like a toy in the Undertaker’s robust raw hands. He stripped the body of its clothes and examined the wounds. The woman intended saying something but he ignored her. He raised his elbow in order to shut her up. Now Death herself spoke to him. And he had to listen.

The agent’s body revealed three gunshot wounds, several blunt traumas and one deep knife cut – none of them lethal. Something else had killed him. Something extremely fast and strong which had left a thin carving on the back of his neck, severing his spinal cord. The Undertaker immediately saw a huge blade, enormously sharp and thin at its end, moving with inhuman speed. The gravedigger grew yet more curious.

“Open his head,” the woman said in a strangely daring and commanding tone.

He obeyed. He took his sharpest kitchen knife and skinned the skull. Then he cracked it open with one single blow.

The brain swelled out. Like smooth yellow wax deprived of any blood cells. The Undertaker pulled it out with his bare fingers. It felt cold but flabby and due to advanced rotting, smelled stronger than the rest of the body.

Something hard appeared in his palm. His thumb rubbed the brain away and there it was – a peculiar metallic object, no larger than a digit, with small carbuncles, not unfamiliar to him. The woman grabbed it immediately. Hastily, she raised it to her eyes and examined it with an eerie look. Her eyes sparkled.

“An amulet,” she whispered agitated. “Older than the world itself.”

Though none of his business, he bothered to ask:

“Excitement? It is that what you feel?”

“Yes…,” she replied, nearing a hypnotic state. Then she slowly turned her eyes back to the corpse of her husband and added: “And a relief too.”

“Was that all?” he wanted to know.

“No,” the woman shook her head. “Not even close. I need you to excavate them all. And open all their heads.”

“I know,” she remarked. Then she carefully hid the amulet, wiped her fingers sticky from the brain onto her clothes and started to undress again. This time she laid in his bed.

He did the same. His moves were hasty, harsh and greedy. He stopped only after he felt his semen spilling into her womb, ignoring the rotting corpse stench gradually pouring into the room.