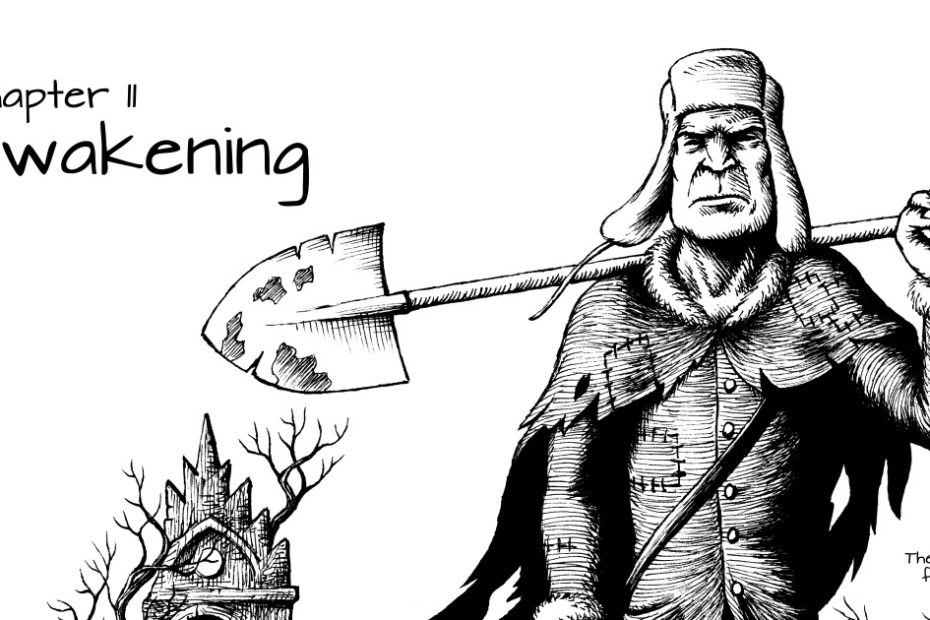 Enjoy the eleventh chapter of the series about The Undertaker from Mokvas. If you haven’t done it yet, read the previous chapters first:

“I…, I…,” the gravedigger opened his eyes, coughed, and spat out a chunk of blood sludge. “I hate this…”

“Welcome back.” Kerbera gently cuddled his head and caressed his face. “Your wounds closed already, your body ejected those… clumps.”

“Bullets…,” the tall man corrected her. Carefully he tried to stretch his limbs. “How long was I… on the other side?”

“Maybe a half hour or less. Do you remember anything?”

“No… When I dream and cannot remember, at least I remember that I dreamt. But when I die… There is nothing… Just an abyss of oblivion.”

“So, what dreams may come?”

The Undertaker sat and looked around.

“I packed your sacred balls already.” The woman handed over his leather bag.

“Yet…,” the gravedigger mumbled to himself, “I remember better. Previously I needed to recover all the memories about who I am and what to do. This time I remembered immediately.”

“Good for you, Geezer.” The mistress stood up, tidied herself and posed coquettishly. “What now?”

The Undertaker, still absent in his thoughts, overheard her question and was scanning the battlefield. He briefly studied the still standing giant iron skeleton and then reached for the severed head of the skincoat. It was once a human head. The remains of the vertebrae and spinal cord were entwined with thin copper wire and small steel rods. And there was also the interface which fused the organic flesh with the unbending machine. The gravedigger stuck his fingers into the open neck and pulled out something familiar. An amulet adorned with small red carbuncles.

“Did you hear me?” Kerbera shuffled her feet impatiently. “I suppose you came here for me. Am I right?”

“Yes.” The Undertaker wiped the amulet on his coat and stored it carefully in his bag.

“Fine…” The woman crossed her arms. “Shall we now save the world? Kill this Trevor whatever scumbag?”

“I need you to be the mother of my daughter.”

The gravedigger surveyed the great gallery and noted unimpressed:

“Where is the exit? I always forget this.”

“Are you insane, Geezer?” the seductive woman erupted. “Death obviously forgot to restore your brain when she brought you back!”

“You always wanted children,” he replied calmly. “Your whole life despite the fact you’re infertile. Now I have a daughter. A month old or so. And you finally can be the mother you always wished to be.”

The mistress bowed her head, exhaling heavily. Suddenly she appeared fragile and exposed. Her hands began to shiver and she hid them behind her back.

“Does she have a name?” she asked in a slightly broken voice.

“No. I wanted to wait for you first.”

Instead of answering, Kerbera turned him her back and resolutely started to march away.

“Hey,” he heaved his voice.

“I’ll wait for you in your buttrupturing graveyard,” she exclaimed.

“You still know how to get past the walls and guards, do you?”

Daring laughter was the response of the fast disappearing woman.

Enjoyed the dialogue?
Get all new stories in your inbox

We send newsletter with latest stories every saturday.