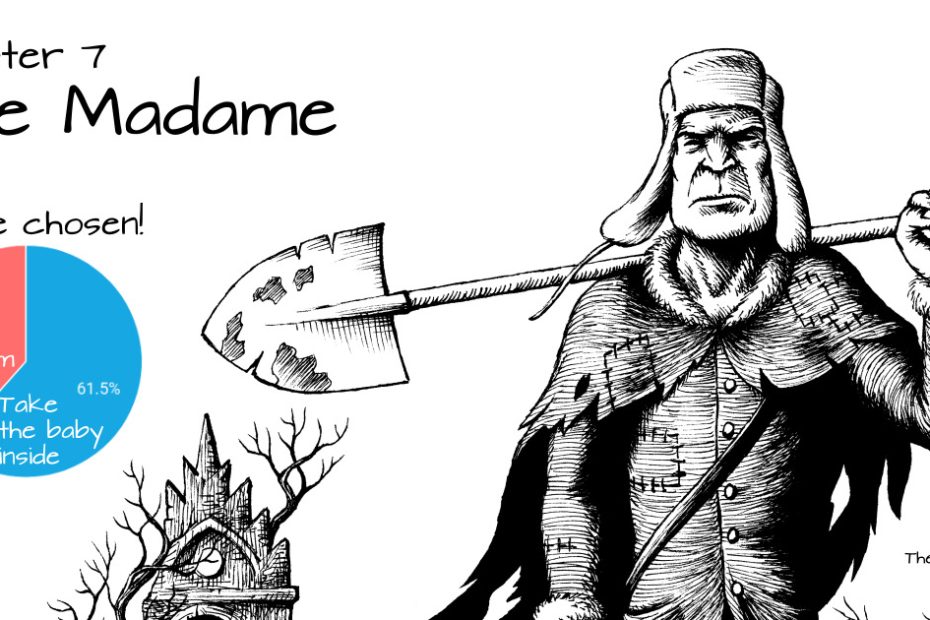 This is the seventh chapter of the series about The Undertaker From Mokvas. If you haven’t done it yet, read the previous chapters first:

As he walked back to his shack, he tried to ignore the newborn’s cries. Without success. All of a sudden it seemed every cell of his body could hear and perceive it despite the increasing distance. Then something strange happened. He closed his eyes and when he opened them again he saw the dark sky with a blurry sickle moon. The edges of the fence touching veiled stars, there was a top of a knobbly withering chest-nut tree and there was an abandoned guardtower with a lapsed roof. At the same time his stomach contracted. Weighted down by fear and loneliness, he became reduced to little more than a shred desperately yearning for warmth and clinging to life.

Out in the cold beyond the bars it was his own soul and blood crying in the dark.

He returned for the basket. It was the only choice. Anything else would bring his world to its end.

Back in the house his ragged hands carefully took the tiny fragile creature out of its makeshift cradle and cautiously nursed it against his chest. His fingers slowly caressed the soft little head with velvety hair. Soon the girl started to sob and within another few minutes she cozily snuffled and fell back into her dreams.

The Undertaker felt her relief, the joy of safety she was experiencing. His knees began to tremble, his eyes were swelling out. He sensed a snuffling in his nose and cramp in his guts.

He stood in the middle of the room, held his child and gently rocked , humming an uncertain melody so it could complement the protective might of his arms. At the same time his brain was boiling. He knew he had to act immediately. He had to feed his girl and take care of her.

Gently he laid her back in the basket. Silently but deftly he moved through the room. Pulled the bed aside without a creak and through the trapdoor he disappeared into the cellar. Swiftly he returned with a full purse and a small wooden case. He placed the case on the table and opened it. The Undertaker peered at a pair of peculiar dry looking plums coated with shining silver. Beholding them, he rubbed his chin and his tense face loosened into a slack grin. Then he stored the purse and the small casket in the leather bag hanging over his shoulder. Gently, he picked up the basket with his daughter, extinguished the lights and left for the city.

His way led him again along the walls, again into the shady quarter where both thieves and harlots lay in wait for their prey. There he knocked on a metal tipped oak door of a shabby residence. A slider moved and a rough uninviting voice asked:

The Undertaker had to bow considerably to meet the bouncer’s eyes.

“The man with the shovel is here. And wants to see the Madame. The sooner you open the door, the better for you.”

The locks cracked indeed quickly and the stature of a muscular hulk with a scarred flattened head and bare shoulders and arms bearing primitive distasteful tattoos appeared. One would say he could strangle a dragon with his giant palms, but recognizing the gravedigger he took several steps back and lowered his gaze as the tall man passed him.

The Madame stood in the middle of a living room decorated to create the illusion of a fine establishment, holding a glass of some cheap liquor in one hand and an unlit filtered cigarette in the other, she kept up a conversation with one of her girls. In her mid fifties, she still looked pretty. Yesterday she was pimped and today she was pimping others. She turned to the Undertaker and her eyes widened.

“Excuse us,” she commanded her lassie and continued to swallow her guest with her look.

“Whom do we have here? The handsome. Well… The last time you visited me, it was fifteen or twenty years ago?”

“I need something from you,” the Undertaker spoke with a lowered voice.

“You all need,” the aging courtesan twittered with a charming smile.

“Shhh.” The gravedigger put his index finger to his lips. Then he showed her the basket. The baby was still sleeping, apparently feeling safe in the big man’s presence.

“Oh, what a little beauty,” the Madame whispered.

He laid the basket on the floor and took out the coin purse out of his leather bag. He offered it to the courtesan.

“This is a hundred silver denarii. When I return, you’ll get five times more. Until then, I need you to take care of this girl as if she was your own. No…,” he hesitated for a moment and then went on. “No, not your own. She is my girl. Find her a wet-nurse immediately. A healthy ordinary woman, not some whore…” The Madame raised an eyebrow but let him speak. “Keep her fed and safe until I return.”

She bestowed him with a strict look.

“Is she in some danger?”

“Well…,” the courtesan replied. “It seems I have no choice.”

“You don’t.” He noted resolutely.

She glared at him for a few seconds and he glared back. Then she finally smiled.

“I’ll be happy to take care of your little beauty.” In response, she quickly snatched the purse. “Even if it should be for free. However, I happily accept your generous offer. Knowing you’re a man of your word.”

He nodded and handed over the basket. He realized he was parting with his fresh gained daughter with burdensome reluctance. But he had to.

After the Madame took the child, he quickly disappeared. Into the twilit city. He marched to the gate, passed the constantly nervous guards and headed to the marshes. His head felt enormous and heavy. He set up something in his mind close to a loose plan. Now he was ferociously pondering how to achieve it.

His feet touched the wet soft soil. The Undertaker finally emerged from his thoughts. Something disturbed him. Everything around fell into an awkward silence. He stood in the middle of the morass. Nothing around him seemed to breathe, nothing seemed to move, to exist. Suddenly his right hand felt too light. Angrily, he realized his empty palm. He had left his shovel at home.

A shrill scream severed the numb air. Immediately followed by a deafening manic laughter. It was the sign of a mighty horned demon waiting for him. The gravedigger realized he had screwed up. He had walked right into its trap and now it was too late to get out.

Have you enjoyed the story? You can support us by buying our latest comic book or by becoming a monthly supporter at Patreon