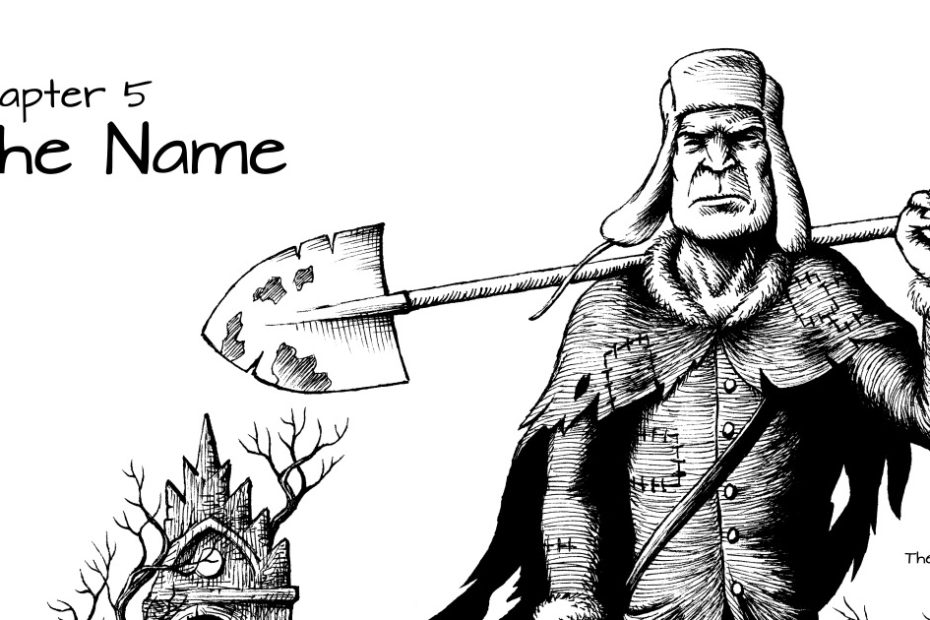 This is the fifth chapter of the series about The Undertaker From Mokvas. If you haven’t done it yet, read the previous chapters first:

On the fourth night the woman arrived as usual, as if nothing happened on the previous evening. No sign of sourness or umbrage. As she undressed in front of him and exposed her firm but sweet body, he was sure that he could spit in her face or choose random humiliation – she would return with the same determination. The Undertaker knew this kind of determination from men obsessed with an idea or power. They all struggled, ruled and shaped the world. He buried many of them. Poisoned, strangled, stabbed, beheaded or shot. Now they all lie here.

The more determination, the more corpses.

The widow enjoyed the act once again, depersonalized. And again he pulled another skincoat out of the mass grave, opened his skull, scooped out his brain and retrieved another amulet with small crimson carbuncles. And after they made love again.

Soon he realized it became increasingly hard to find a body not yet opened. With each victim he also carefully studied the wounds. Finally he came to the conclusion that the party of skincoats had dealt with a group of four. Although there were several types of wound, there were only four distinct styles. And each of them had mastered his or her art of fighting beyond anything he had seen for a very long time. The first two used firearms. One of them had to be a true gunslinger with a revolver in each hand, firing simultaneously at a high rate. The second appeared to be a marksman. With precise, heavier and devastating shots. The fourth one was a knife thrower and adept of short blades. Actually two of those knives were still stuck in the corpses – delicately crafted and carefully balanced weapons.

And the fourth one…? Bit of a mystery. However, the deadliest of them. His blows cut through the flesh like a razor through butter. With such force and velocity they had left burns behind, or the bodies decapitated or even sliced in two – vertically or horizontally. And his (or her…?) weapon was some sort of gargantuan sword, immensely sharp.

The Undertaker kept these discoveries to himself. He was not asked, so he didn’t talk.

But what really surprised him was something else. After little more than two weeks he found out that he had suddenly started to enjoy the company of this enigmatic widow. Subconsciously, he tried to prolong her stay with new activities. He cooked her tea, even offered her some fresh porridge. He engaged with her in smalltalk. In bed, at the table, during a walk through the ghastly graveyard that he even perceived as romantic. He considerably prolonged their coitus and since an uncertain date they had begun to kiss. Something in him wished she would continue to return and that scared him. His well preserved solitude was shaken and it felt like sacrilege and redemption at the same time.

“So… this is it,” the woman noted while sitting naked on his bed. They spent a mere half hour in complete silence and listened only to the soft whisper of the Undertaker’s fingers caressing her back and playing with her long dense hair. Then the moment arrived when she stood up and started to dress.

“Could we…,” he decided to break the quietness and realized the gravity of each delivered word. Usually he avoided talking, now he was unable to.

“No, we couldn’t.” Her answer was plain and implicit. “It is done. You’ll not see me anymore.”

The widow put her fancy black coat on, slipped her slim hands into her gloves and adjusted her hair.

“Farewell,” she parted, when approaching the entrance door.

“Does it even matter?” the woman laughed amused. She was about to leave, then hesitated for a second.

“My name is Claudia. Believe it or not.” Then she disappeared into the darkness.

“Farewell, Claudia,” the gravedigger sighed after she was long gone.

She told him he would never see her again. She didn’t knew how wrong she was.

Enjoying the stories? Get them on paper

Undertaker from Mokvas isn’t the only story in the house. We’ve finished the series about the rabbit Ronald and Donald. Support us at Patreon and get one copy as a gift.