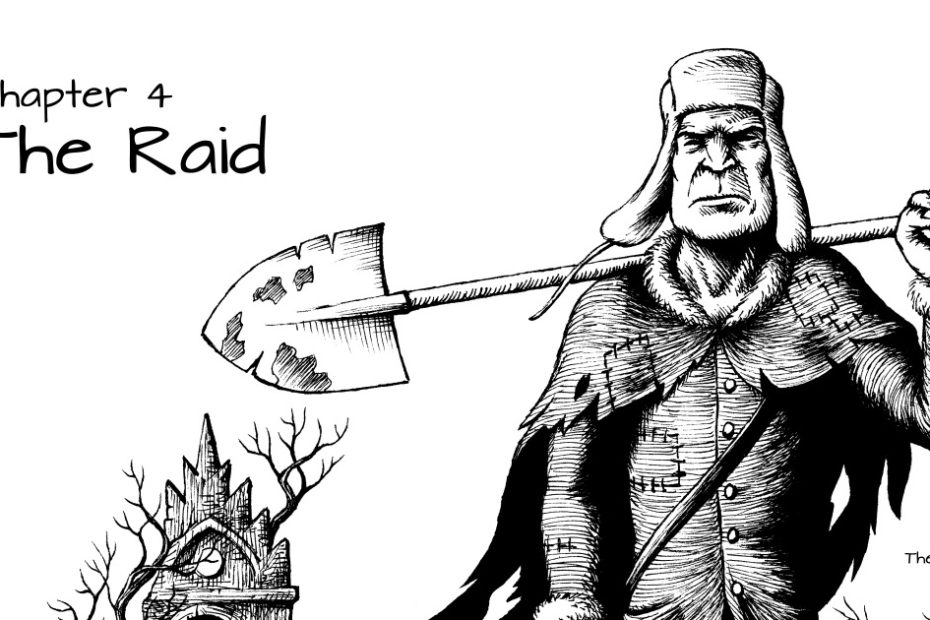 This is the fourth chapter of the series about The Undertaker From Mokvas. If you haven’t done it yet, read the previous chapters first:

The following evening the woman only managed to throw one single stone. He already stood behind her back. This time she shrieked with both palms on her chest.

“I didn’t expect…,” she stuttered trying to catch her breath.

“No excavation today,” the Undertaker announced briefly. “You may leave.”

“What…? Why…?” the woman was unable to hide her annoyed surprise.

“Like I said, leave,” the grave digger insisted. “Piss off.”

She wanted to say something but kept it to herself and turned her back.

Satisfied, the Undertaker dropped his shovel on his shoulder and headed towards the city walls. He marched along for a while, through dark alleys and shady neighborhoods, where petty thieves, aging courtesans and occasional assaulting thugs tended to lurk for victims or just hang around. However, when some of them spotted the lofty figure of the Undertaker with his massive shovel, they decided they had better hide or dart out of sight. Except for the rusty old hookers who bestowed him with lascivious smiles and hailed him with familiar greetings. Some of them actually knew him from their significantly younger days.

The man walked past with hardly a glance, crossed one of the city parks where in spring and summer flowers of all colors bloom, with basins with green water around scrubby fountains, and moldy wooden banks where during warm nights and evenings all the lovers meet and kiss.

Finally he reached the main western gate and ordered an evidently shocked guard to open it.

“But, but… but… it is night,” the young lad stammered and peered at the visitor, obviously never having seen such a tall and strange fellow before.

“That is the Undertaker, you idiot,” someone whispered behind him. The young man quickly realized the voice belonged to his superior. “Open the gate, immediately, I don’t want any troubles during my shift!”

The recruit did as commanded, all the time fixing the strange tall man with his gaze as if he would bring the whole graveyard with him.

Finally, he left the city with all its filth, shadows and vibrations behind. And the great wide open full of dense forests, bogs and penumbral retreats with lurkers behind every stone or tree waited ahead. And its hidden lanes and paths leading safely through deadly sinks and marshes inhabited by spirits, will-o-wisps, apparitions and bloated corpses which refuse to rot. Just another cemetery. Similar to his own, but much larger.

He lit a torch and, grasping his shovel, entered the labyrinth of morass.

The torch burned brighter and its light turned green from the peculiar and noxious smelling gasses leaking from hollow spheres undoubtedly protecting unholy secrets. At last the earth was firm thanks to the cold season and it would become much harder with oncoming frosts and blizzards. Snow already impregnated the air and was eager to cover, to entomb, the country.

The Undertaker arrived in a narrow swampy glade and looked around.

“Come out, I know you’re stalking me,” he shouted. At first it seemed nothing happened. Then his well trained eyes caught slight movements on the periphery. Suddenly, what appeared to be stone, shrub, tree or muddy pool turned to further, bizarre, silhouettes. Creatures unknown to common human mind and eye began to rise and surround the intruder.

He had already choked the torch in order his sight could adapt to the fluorescent darkness. His aim was not to see better but to be seen and the light helped. Now he had both hands free for his tools.

A hissing voice out of nowhere and everywhere at the same time enveloped his mind.

“You know why I am here,” the Undertaker answered unimpressed, using his vocal chords. “Every time you ask me the same stupid question.”

“We don’t want to fight you,” the voice in his head urged.

“Then leave these lands,” he replied, and turned the shovel daringly in his hand. “You don’t deserve it when you don’t protect it.”

He knew what this would trigger. The silhouettes around him attacked. Hesitantly. One after another.

The Undertaker used this tiny moment of their timidity and struck. With shovel in the right and with his belt in the left.

The speed of their movements were like lightning, the intensity of their impacts deadly. For every single commoner who would dare to disturb their territory. But not for the Undertaker. He dodged them easily and served one punch after another. His shovel always found its target and mercilessly polished the face of a floater or the back of a spirit. The heavy iron buckle of his belt swiftly jumped from body to body, every time leaving a scream of pain behind. The gravedigger even managed to occasionally hold his loose trousers with free fingers, as he had forgotten to fix them with a rope after pulling the leather belt free.

To his disappointment, the battle was over before it had barely begun. The spirits and elementals moaned, the devas and yakshas sobbed, the floaters gurgled. They rubbed their wounds, retreated, even ran in panic when the Undertaker turned back towards them. Until all disappeared into their sinister hideouts, temporarily calmed. Soon their memories would disperse, they would recover and once again attack anyone on the spot. Even him. That was the reason why he favored them in such a manner.

Already on his way back home, the earth behind him began to tremble. Cautiously, he stopped and looked over his shoulder. A pillar of amassed green light rose up from the swampy soil and formed into a huge presence. A shape of limbs, tentacles and thorns waved hypnotically towards him.

“Cursed one,” the same voice that greeted him upon arrival resounded now. “Every time you enter, you conquer and leave. Why?”

The gravedigger knew it was a projection of thousands of wisps who had formed into the shape of an arch spirit, the genius loci of this place.

“You mock us, you taunt us, you harass us with your sheer arrogance!”

The Undertaker sighed and yawned. With the shovel on his shoulder, he showed the master apparition his back and continued walking.

“I reveal it, if you don’t,” the genius loci said. “Bound to your cursed fate you’ll never find peace. Because you’re similar to us with your ill mortality.”

“Horseshite,” the gravedigger grinned once out of the bogs and marching towards the nightly contours of the walls of Mokvas. “I need practice.”

In fact his skills have become quite rusty. During the past year he has visited the swamps only two, possibly three times. Now with this strange force which easily sliced twenty-two skincoats he had to improve. He’d have to visit the swamps perhaps once or twice a month and beat the crap out of the spirits more often.