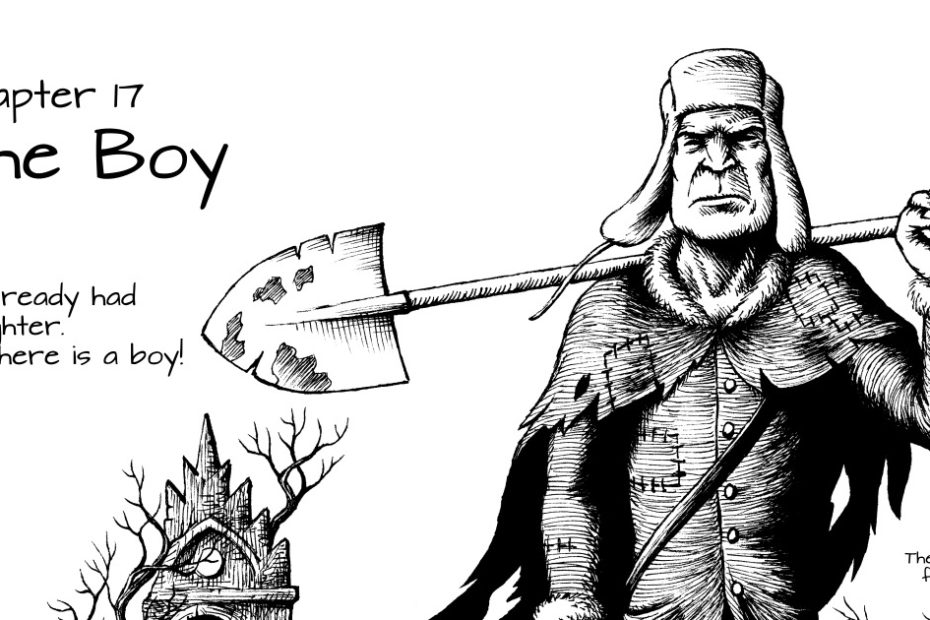 A single superhero father called the Undertaker has to face another problem. He already has a daughter. Now there is a boy. What happens next?

The Undertaker is an internet novel published chapter by chapter each week. Follow the story of a single superhero father who tries to raise his daughter in a world of demons, succubas and the infamous Trevor Ociph. (join the newsletter to never miss a word)

“I know exactly what I want for my daughter,” the Undertaker replied, annoyed that Kerbera had once again reminded him of the risks of feeding the child with her milk. “You should feed her. Despite the fact she may become a part demon.”

“What did you say?” the succuba asked in a tone predicting danger.

“I said,” the gravedigger sighed, sensing trouble, “that you should feed her.”

“The one about the demon.”

“I told you already,” Kerbera growled with clenched teeth, “that if you call me demon once more, I’ll ram your shovel in your ugly ass.”

“That was fifty years ago…”

“Even so! And you still can’t remember! How often should I reiterate that I’m a being of light and demons are creatures of shit!”

“Earth, to be precise…,” the gravedigger muttered quietly.

The angry succuba hurled a small brass pan at him. The Undertaker ducked and the pan just missed his head. The baby woke up and started crying.

“Just feed her, please…,” he threw in and exited the house.

Outside he exchanged his shovel for a rake and began to scrabble the golden yellow of fallen witheried leaves which had descended upon his domain in abundance. Sunken in his thoughts he noticed a disturbing movement from the corner of his eye.

A high pitched screaming was closing in, chased by a loud rough swearing. When they came near enough, the gravedigger leant the rake against a crypt wall and with crossed arms watched the incoming spectacle.

A small but agile boy was being hunted by a grown man with a dense brown beard and the rolled up sleeves of a lumberjack tunic revealing thick blunt forearms fully covered in hair. Hair also covered his bare shanks. To the Undertaker the man resembled a spider trying to catch a little ginger fly. With an amused grin the gravedigger followed this pursuit which, after a slight hesitation of the spider-man, continued into the cemetery. Here the couple engaged in an inconclusive play as the ginger boy started running around an old plane tree as the bearded fellow vainly tried to catch him.

“You little hagshagging bastard! ” the man panted, wiping his forehead with one of those hairy forearms. “I’ll tear you apart, I swear!”

The little boy focused on the moves of his pursuer and remained silent. The spider cursed and spluttered but with no intention of giving up. This went on for several minutes and the Undertaker enjoyed the show. Until the moment the spider finally succeeded to trick his victim and the ginger boy ran into his hairy hands.

“Now I’ll break all your fingers and toes so you can’t steal and run,” the man announced jubilant while struggling with the boy desperately trying to break free.

Here the Undertaker overcame his unwillingness to interact with such an amusing performance, grasped his tool and approached the uneven fight.

“You may break whatever you want, but not in my cemetery,” he calmly addressed the spider.

The bearded man eased up throttling the boy and turned his partial attention to the newcomer.

“This is not your cemetery,” he hissed and after managing to grip the boy’s ear, which forced the ginger to capitulate, added: “It’s the property of the city.”

“I don’t care,” the Undertaker replied. “Just get out.”

“Who do you think you are?” the spider yelled, trying to outvoice the ginger’s painful screams. “A man with a rake? Any idea who am I?”

“If you don’t leave, you’ll soon be a man with a rake in his ass,” the gravedigger replied. “Take the boy and be gone.”

“You’ll hear from me,” the spider remarked with an malefic glint in his eyes.

“No, please!” the boy wept as the man towed him by the ear to the entrance. “I’m here for Kerbera! Help me!”

“Oh, hell… Split-crotched virgins on roasting spits…,” the Undertaker sighed and showed them his back. Right in front of him the new mother of his child was hastily marching in their direction. With open blouse, uncovered décolleté and the girl in her arms. She insistently pushed the little one into the gravedigger’s arms and advanced with a thunderous expression towards the retreating couple. The Undertaker sensed that something terrible was about to happen soon and couldn’t decide whether he wanted to watch or not.

Within a few seconds Kerbera held the bigger of the both intruders by his ear and the spider was writhing from pain and begging.

“Not any more,” the succuba replied, and accompanied the hairy fellow out of the cemetery where she set him free.

When she returned with the ginger at her hand and passed the dumbfounded gravedigger helplessly holding his daughter in one hand and the rake in another, the tall man remarked:

When she didn’t bother to answer and headed with the boy towards the house, he added:

This was the only answer.

The terrible happened indeed. The Undertaker’s only thoughts at that moment were to put his daughter back in her cradle and drain a bottle of Razor’s Edge. Or better two.

Heavily breathing in and out he was nearly caught off-guard. A boy appeared at his side – another child. This time a familiar one. With jaundiced piercing eyes and unhealthy pale skin. The boy was handing over an envelope. As soon as the gravedigger took it, the weird child vanished from the yard in the same manner as it had appeared – quickly and silently.

The Undertaker dropped the rake and cuddled his daughter. He already knew the consigner.

This is important. We need to talk. Asap.

It was from Director Creosote.

You can still choose what will happen next.

Get 20% discount for our comics

by joining the weekly newsletter

Have you enjoyed the story?

There is more inside our comic books.