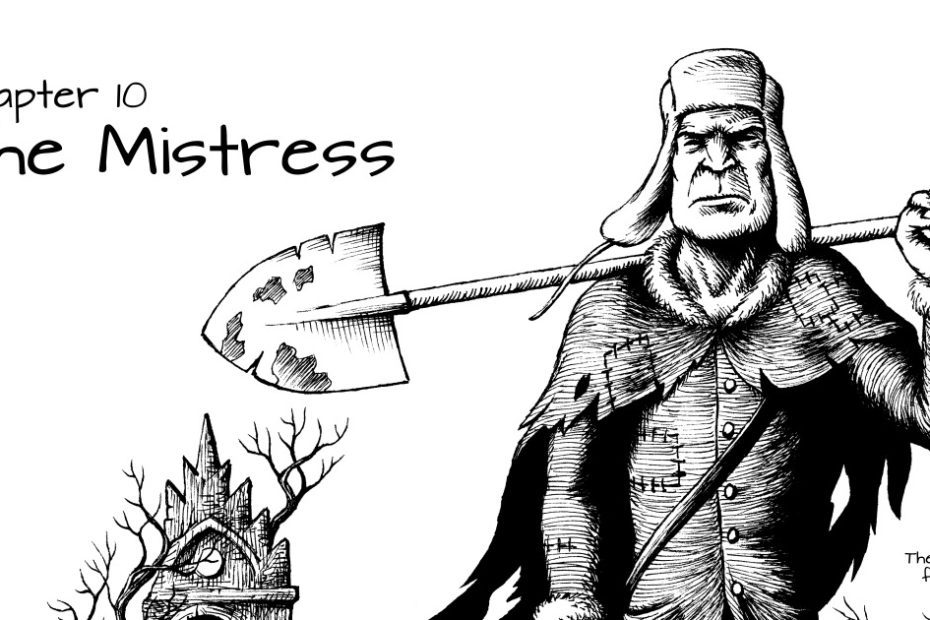 This is the tenth chapter of the series about The Undertaker from Mokvas. If you haven’t done it yet, read the previous chapters first:

The Undertaker and Loktibrada finally reached the ground. A gigantic hall with delicate decorated pillars and glowing walls covered with colorful frescoes unfolded before them. If there had been a vivid chatter echoing beneath the monolithic arches, it ceased now. Dozens of pairs of eyes examined the arriving ones with suspicious curiosity.

“Where is she?” the gravedigger asked vigorously after they found themselves in the middle of the megalithic underground space, surrounded by various gazing demons, goblins and imps. The vestibule was quickly filled with ratty hissing whispers.

“There, master, there,” Loktibrada replied in a reassuring tone. “We need only cross the hall.”

They walked through the great gallery where animated paintings covered the walls, depicting daily and ceremonial life of a civilization already forgotten aeons ago and never before seen by common human eye. Occasionally the Undertaker raised his fist, reminding the dwellers, of which some were carelessly trying to shorten the distance between them and him, who was in charge here now. They continued until the hallway rose into an intersection with several small chambers with low roofs. In one of them, hidden in the shadow of a corner, a female stature nestled to the side. Her feet and hands shackled in a heavy chain hanging from the ceiling, her mouth bound with a strip of fabric.

“Untie her,” the Undertaker commanded.

A skinny imp leaped hastily towards her and roughly ripped off her gag. While the bony fiend dabbled with her chains, she and the gravedigger stared at each other for several seconds.

“It’s nice to see you too, uglysome,” the female noted with a dose of sarcasm. “Do you regularly stumble upon a damsel in distress by accident? Or you just need something, as per usual?”

“Shut her up again!” the gravedigger ordered. The imp merely suggested replacing the gag when the woman swiftly charged and first rammed the fiend with her forehead, following up with a blow from her hand shackles to his stomach. The skinny imp bounced away in terror. She hissed at the spawn spitefully and immediately turned her face to the Undertaker, endowing him with an irresistible smile.

“I really hope you haven’t come here empty handed, Geezer,” she remarked once the skinny imp had at last unchained her and swiftly vanished for his own good. “Considering your experience with these folks, you hold the balls of the All-father in your fist. Or did you finally manage to charm them with your overwhelming personality?”

Not expecting an answer from the gravedigger, she added:

“You are aware that they already hate you and they’ll seek even more revenge upon you?”

“Hm,” the Undertaker muttered and with his eyes swept the great gallery before them. He would bet his shovel the demons were up to something. He couldn’t guess what.

“You smell terrible, Geezer,” the woman assured him. “You were pissed off by one of them? Or maybe pissed on? Can you at least tell me what brought you here after more than fifty years?”

The tall man grabbed her steadily with his free hand, pulling her through the hallway.

“Not now,” he replied, firmly. He was scrutinising the demons encircling them but keeping a safe distance. Something foul filled the air and he needed to find out what it was sooner rather than later.

Suddenly the cautious chatter died down further and the demons began to form a passage.

“What is this?” the gravedigger grunted through his teeth, his eyes fixing on a large shadow approaching from one of the side corridors.

“I don’t know,” Kerbera replied indifferently. “I thought you were the one living above.” After he granted her a gloomy look, she added: “They brought it with them.”

It… This “it” produced creaking sounds and was of an enormous size – a head bigger even than the freakishly tall Undertaker.

“A skincoat…?” the gravedigger dropped in disbelief.

But instead of explaining, he pulled the woman behind a massive marble sarcophagus.

“You have the balls of the All-father!” Kerbera yelled.

“It will not work,” the tall man noted as he observed from beyond the cover how the sleeves of the skincoat identified silhouette rolled back and something strange unfolded. After a rapid burst of fire the Undertaker realized two brand new rotating mechanized guns as opposed to hands now stood against them.

“Of all the warts in a witch’s womb!” the woman cursed and covered her head. Her outburst was paled against the mighty voice of the emerging spook.

“Felony committing citizens! Surrender to the order of the forces of the great chairman Trevor Ociph! Your unconditional submission will be considered as extenuating circumstance in your further trial!”

“You haven’t been a long while in civilization, have you?” the gravedigger grinned sourly.

The stygian maiden couldn’t answer anymore, all her words perished against another salvo from the ogrous skincoat. As they ducked further behind the sarcophagus, the Undertaker used a short firing pause to clench his closed fist considerably stronger. The answer was an amassed howling of the demons. Right after his voice echoed through the great gallery:

“Attack and destroy this creature or I’ll pulverize the balls of your All-father and you shall all be doomed!”

The demons indeed stormed towards the skincoat. This should have been a very short process. But instead both the mechanized guns rattled and roared through the hallway, followed only by death-cramps and screams.

“They are,” the Undertaker replied. “However obviously not immortal.”

The brief conversation was interrupted by further waves of onslaught and gunfire.

Ludo the Shovelface and his bastards must have developed a new and extremely lethal machine, the gravedigger summarized in his thoughts as he tried to peek from behind the sarcophagus and watch how this skincoat monster mowed down even the mightiest of the fiends. Ruthless horned demons like Loktibrada, Wah’hab, Eblis and Ninurta were literally cut in half, their heads exploded like smashed pumpkins. A new awe-inspiring weapon had been unleashed. A weapon the threat of which nobody and nothing here had been aware of. And into the rumble and screams the voice of the creature calmly repeated:

“Hold back and don’t interfere with law enforcement! Any violation will be punished!”

The couple soon realized that the Hadean helter-skelter had calmed down. Only the moaning of the wounded remained. At once loud steps of heavy metallic boots approached both the hiding fugitives.

“Do something!” Kerbera prodded the gravedigger with her elbow.

“I’m not invulnerable,” the Undertaker snapped back.

The tall man gnashed his teeth. The huge skincoat was closing the distance. Soon he would emerge from around the edge of the sarcophagus and unload his bullets into them. There was no escape, the corridors were way too far off and none of them led to the surface.

“Ruptured rectums!” he swore and jumped out.

Everything happened very fast. But not quite fast enough. The gravedigger was aware that there are laws of physics and dynamics which no living being can cheat. Neither commoner nor the divine. He knew well that a shielding from bullets is possible, but not dodging them despite the speed he was capable of.

All was over within a few seconds. In those seconds he sensed blood on his tongue, blurred vision and pain in his stomach, guts, hands and feet. The last part of his sprint he moved with persistence and concentrated all his remaining strength on one single hit. Eventually he fell to the cold stone ground, coughing and spitting his own blood. He released his weakened fingers. The balls of the All-father slipped to the floor, as well as the torn off head of the skincoat monster.

The headless creature stopped moving but its blasters continued to spout projectiles in multiple directions with increased speed. Till they turned red from the raging heat and the torso burst into flames. After a while a sooty iron carcass remained in its place.

Kerbera crawled out and hurried to the gravedigger. The tall man lay in a growing puddle of his own blood. His breath grew slower and laboured. The woman placed his head in her lap and caressed his dirty matted hair.

“An entire world is dying…,” he whispered with gurgling red foam in his throat. “And the future…?”

“You’ll return,” she grasped his hand, now becoming colder and colder still. “You’ll be back as you always are. I know it.”

“I…,” the Undertaker uttered his last word and his eyes turned vacant. One last heavy breath exited his punctured lungs and the world descended into silence.

Have you enjoyed the story? You can support us by buying our latest comic book or by subscribing to every new comic book release through Patren.