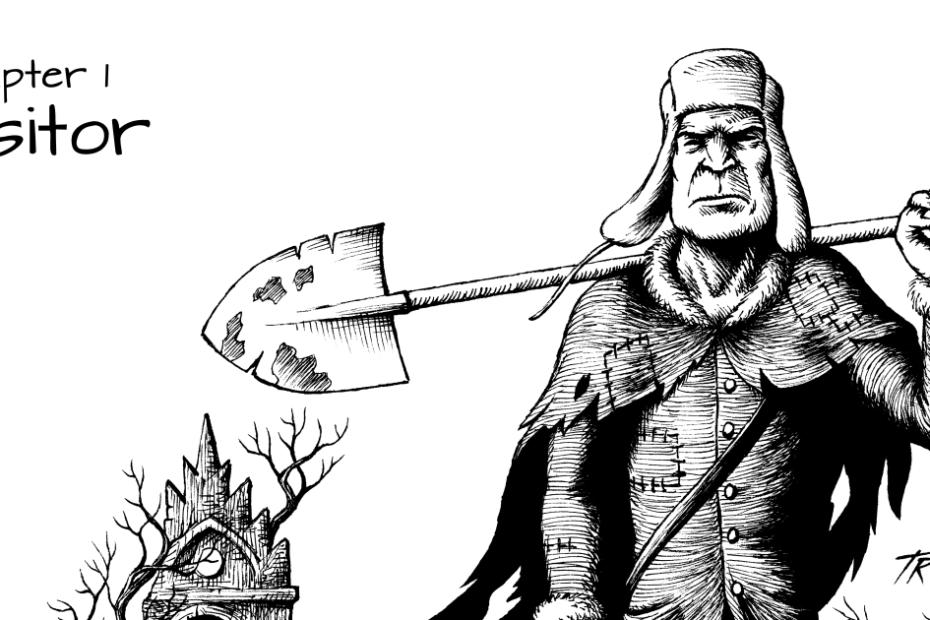 In the first chapter of the series The Undertaker from Mokvas you will read about corpses and a widow.

Check all the chapters by Martin Jurík after this one – there are more corpses, but no more widows.

A dull yet annoying sound sneaked its way into his dream. At first he believed it was a part of it. In this dream he had been trying to put someone to rest. After the coffin was released and touched the fresh moist earth, the deceased woke up. And hammered with his fists against the lid. But the gravedigger didn’t give a damn. He shoveled the earth back into its pit as he usually did. He wasn’t bothered. Once something is in a coffin, it stays there. It wasn’t his job to release some poor soul which suddenly decided to wake up. His job was to keep this poor soul in its place.

Certainly, several times a year it happened that the dead woke up. They battered against the coffin walls, they screamed, they begged. With his finely sharpened senses, the Undertaker could hear them all. But, as has been said, he didn’t give a damn. He was paid to bury them, not pull them out.

The annoying sound persisted. It was definitely not a dream. It was much louder, rhythmic, stronger and vibrating. No woken soul would ever hammer in such a calm and steady way like clockwork. Out of sleep, back to his consciousness, the Undertaker finally realized some idiot was throwing stones at the shutters of his house. Through the high razor-sharp fence where many who tried to sneak into his graveyard were cut in half. Covering the entire distance from the fence to his house. Someone really good at throwing with a nasty supply of rocks. The Undertaker swore, slithered out of bed, put on his rags and, along with his keys, grabbed his shovel. He promised himself he would cut the nocturnal intruder’s head off – slowly and painfully.

And there he stood. Beneath a sickening foggy moonlight, beyond his kingdom of the dead, the Undertaker observed the ghastly silhouette still throwing rocks. This bastard brought a full cart of them and was not aware of his presence. The gravedigger approached almost invisibly. He was feared for his cunning skills. Soundless sneaking, for example. He had this unpleasant habit of appearing behind someone’s back out of nowhere. Not seldomly, this someone suffered a stroke and dropped dead. Especially when the victim was inspecting the grave hole for some recently deceased relative. In such cases the Undertaker didn’t even bother. He left them where he fell and threw the coffin at them. For these reasons, the Undertaker tended to dig his holes a little deeper. Just in case.

The hooded person throwing rocks sensed his presence. It ceased and loosened the rock from its hand. Slowly it turned towards him.

A woman. Tall, slim, with a solid body used to hard labor. The face quite young, more pretty than ugly. She seemed to have expected him.

“Are you going to use that against me?” She pointed her look at his shovel. Her voice sounded calm and soft. And fearless.

“Possibly,” he answered darkly. “What do you want?”

We are sorry to interrupt you

What about owning a comic book?

Psssst! You can have 20% discount for all titles.

“Can we talk inside?” she insisted.

The woman bowed her head and remained silent.

“You can throw from here, you can talk from here. Or piss off,” he told her, unimpressed.

“I need someone excavated, now,” she confessed.

The Undertaker threw his shovel on his shoulder, turned away and began to walk back to his graveyard.

“Wait,” the woman shouted after him, then added shyly, “I’ll give you… anything you want.”

The Undertaker stopped. When he turned to her, she could see the demonic smile on his face. For a few seconds he examined her.

“The coat,” the Undertaker commanded.

The woman obeyed. Slowly she removed the warm and heavy coat, rolled it carefully and put it into a cart. She had on a tight ink-black robe. Her collar bones under her pale skin reflected the moonlight as well as her onyx necklace. Her hair was beautiful. Long, dense and uneasily tamed. He let her wait in the cold and observed how she strived to resist the chilly night, how her breath would be drawn heavier, how her body would start to tremble and her lips turn blue.

The Undertaker walked, she followed several steps after him. Through the gate, through the alley, into his house.

“Clothes,” he pointed at his bed.

She stood in the middle of a large room. Dirty, simple and rustically equipped. She looked around, pretending she hadn’t heard him. Then she approached the massive wooden dinner table. With her back to him, she started to undress. Her attire dropped to the cold earthen floor. In front of the Undertaker, the body of a steady healthy woman was uncovered. Sinews, muscles, bones. Round tasty breasts, straight long legs. All teeth in their place.

The Undertaker threw his shovel into a corner. Clumsily, he undressed his enormously tall, deformed, ungainly figure. Ugly and repulsive though he appeared, he was still a man with animal desires. He took the strange woman he knew nothing about, not even her name. He had no care to know it. Now she had become his victim, or maybe he hers. He took her like he did everything – harshly and savagely. At first she sensed only pain. She felt him like glowing iron, ready to melt and burn her whole body. She wished she had experienced such frenzy years ago, with someone she imagined loving, in times when she was younger and the world was a much better place in which to live.

He carelessly finished within her and when he parted he noticed she still chewed on her own bloody lips.

“Whom do you wish to excavate?” the Undertaker asked, tying his trousers.

“My husband,” the woman answered.

There are more stories about the Undertaker from Mokvas that we are going to publish. If you really liked this one, consider subscribing for our weekly Royal Saturday Newsletter.

Let your bank pay for each new comic book and forget about it.

Have you read all the stories?