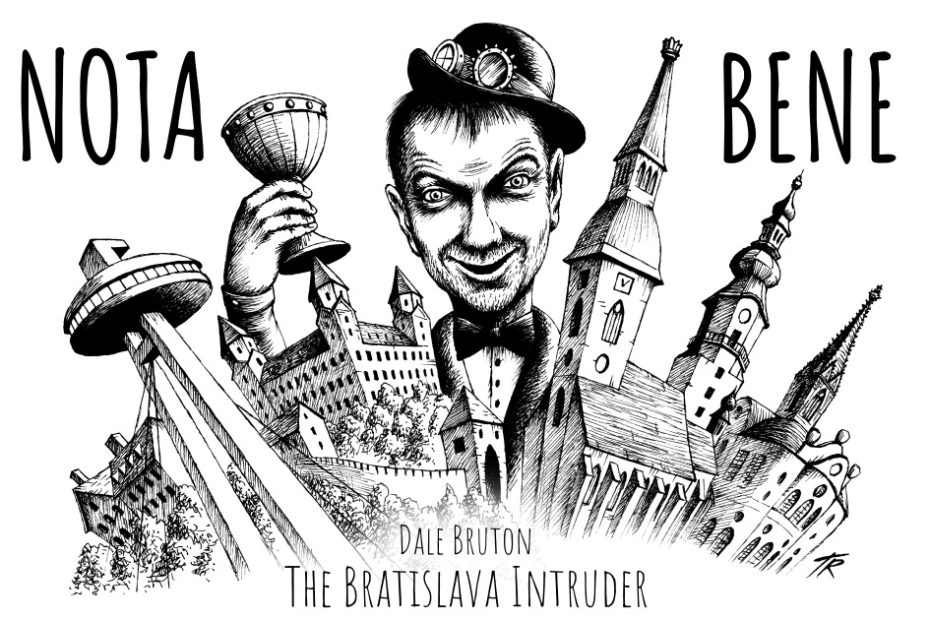 What is the mystery surrounding a homeless magazine seller?

Are you prepared to read a mysterious story about Bratislava written by Englishman Dale Bruton?

Dale Bruton is The Bratislava Intruder. Read all his stories:

As Lucia settled herself into her workstation’s seat, her colleague, Barbora, saw in her face there was something she wanted to share. ‘What’s up?’

Lucia came close to shrugging it off before it tumbled from her tongue. ‘Did you park in the lot as usual this morning, Bara?’

‘Go through the underpass?’

‘It’s horrible. Freezing cold morning and a woman selling Nota Bene with a baby in a pram.’

‘Wait a minute. You get a look in that pram? You sure it was a real baby?’

‘It was crying, poor thing.’

‘Jesus. How can someone let a baby lie there in a pram for hours in this temperature?’

‘I don’t know. Maybe the baby is homeless too.’

‘Get real, Lucka. How can a baby be homeless?’

‘I don’t know. Maybe because its mother’s homeless.’

‘And what’s a homeless woman doing carrying a baby around with her? Anyway, how do you know it’s really her baby?’

‘Well, maybe she borrowed it, you know, to attract more sympathy, sell more magazines, get more money. I mean, that’s why so many beggars have dogs, yes? Same principle applies.’

‘And who is she going to borrow a baby from?’

Bara rolled her eyes. ‘Oh, Lucka, you are so naïve.’

They looked up to see Mirek had joined them, their mutual workstation neighbour.

‘I’m trying to give Lucka an education on the homeless.’

‘Jesus. Homeless. Well, it’s a simple equation for me.’ He produced and unwrapped a takeout McMuffin. ‘Who doesn’t work, doesn’t eat,’ he concluded, as he chewed off a mouthful.

‘Yeah, but we’re talking about a baby, Mirek,’ Lucia protested.

‘So anyway, who would lend a homeless person a baby, for god’s sake?’

‘Mafia,’ he intoned more assertively, then finally swallowed his outburst’s hindrance. ‘All those beggars in the street, the money people give them. They don’t get it.’

‘What do you mean they don’t get it?’

‘That’s right. At regular intervals someone from the mafia comes and collects their takings.’

‘Someone I know. The people you give the money to, they don’t get it themselves.’

‘No, that’s not always true.’ Mirek’s muffin was competing with the conversation for his attention. ‘The elderly ones are pimped, the disabled, cripples, amputees, the most pathetic ones.’

‘Exactly! The ones who depend on someone. That’s howcome they’re there on the streets for so long. You throw a healthy intelligent person like one of us out on the street like that, any normal person wouldn’t last a month.’

‘Eugh, I tell you, I couldn’t go a week without washing my hair.’

‘I’m a bit lost here. So you’re telling me not everyone who’s homeless is pimped by the mafia?’

‘No. The ones who know what they’re doing are earning more than the three of us put together.’

‘Oh yeah. I personally know about one woman who is begging in the centre of Brno and was pulling in more than 3,000 euros a month, living in a three-plus-one by herself, home cinema, walk-in wardrobe, the works.’

‘What? You went to this person’s apartment?’

‘I heard that as well,’ Bara said. ‘I mean that beggars make a lot more money than working people. I heard some of them can take more in a day than the rest of us make in a month.’

‘Are you serious?? I thought they were supposed to all be drunk all the time.’

‘Exactly,’ chorused Bara and Mirek. ‘Have you ever been able to get drunk as often as they do?’ concluded Bara.

‘Why are we talking about homeless shirkers anyway?’ Mirek wanted to know, licking his fingers then wiping them on his jeans.

‘It’s just that I saw a woman selling Nota Bene with a baby in a pram this morning.’

‘For months?? But shouldn’t somebody do something? I feel sorry for the baby.’

‘Me too,’ offered Bara. ‘A woman as uncaring as that shouldn’t be let anywhere near a child.’

The three looked up to find Tomas had arrived for work. ‘What are we debating here?’

‘Tomas,’ asked Lucia, ‘tell me, what do you think? Did you go through the underpass on the way to work?’

‘No, I come from the other direction.’

‘OK, maybe homeless woman, selling Nota Bene, with a baby in a pram, and she’s been there for months.’

Tomas looked like he was sucking on something distasteful.

‘I say she’s with the mafia,’ declared Mirek. ‘For all we know, the baby might even have been kidnapped. One thing’s for certain. She’s not getting a cent off me, I’m not sponsoring no babynappers.’

Bara contributed, ‘And she won’t be getting any money off me either. Bitch deserves locking up if you ask me.’

‘But shouldn’t we call someone?’ begged Lucka. ‘I mean, the baby.’

‘Nah, absolutely no point at all,’ underlined Mirek. ‘She’s been there for months. Authorities are bound to be aware of it. For all we know, if it is a mafia thing, they’re being paid off.’

‘Well, what did she say, anyway?’ asked Tomas.

‘The homeless woman. Or the woman selling Nota Bene? What does she say about her reason for being there?’

As one, the rest of them shrugged. ‘I don’t know,’ said Lucia. ‘I guess no-one asked her.’

Do you want more?

Join our weekly newsletter and be notified about the future stories by The Bratislava Intruder.

Have you enjoyed the story? You can support us by buying our latest comic book or by subscribing to every new comic book release through Patren.

Tired of reading. Listen to the series Undertaker of Mokvas narrated by Dale Bruton.